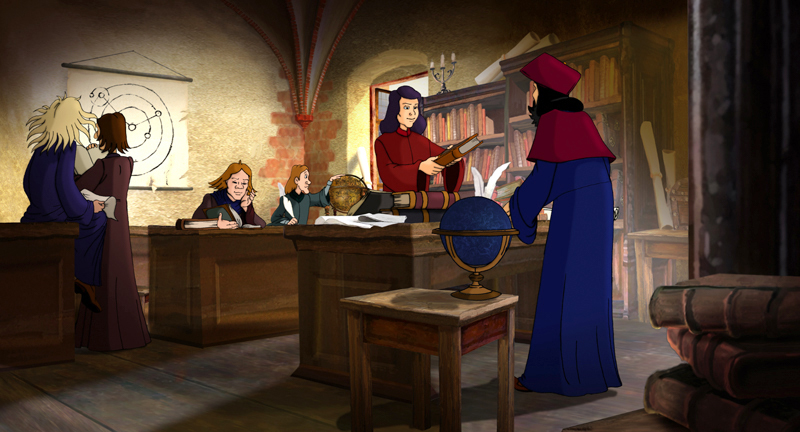 When Nicolaus is ten years old, Paul van de Volder, a Dutch astrologer, visits his house in Torun and foretells Nicolaus a brilliant future. With the help of his father the boy begins to take an interest in the stars hoping to find some answers. When his father dies Nicolaus does not lose faith. Some time later he starts to study at the Jagellonian University in Cracow. It is here that he meets Paul van de Volder again. The battle for Nicolaus’s soul begins. On the one side we have the charlatan astrologer Van de Volder , on the other Wojciech of Brudzewo and the other professors at the University. The young Nicolaus discovers the secrets of the sky. Astrology and astronomy are in conflict. Searching and doubt lead Nicolaus to an astounding discovery. His studies in Italy confirm its validity beyond doubt. However, before he is to become quite certain of his claims, the young Nicolaus must come into final conflict with his adversary Nicolaus Copernicus, the great astronomer who is known world wide because he changed the perception of our position in the Universe. This gives us an ideal pretext to present a hero who does not forget his childhood dreams on becoming an adult. Our hero, as most of us, sought strength in others at first but growing up discovered his own strength and took advantage of it wisely. Faith and fact , miracles and reality, dreams and aspirations come together in an era when astronomy and astrology intermingled and when alchemists were seeking the Philosopher’s Stone. This was an extraordinary era of great discoveries and the growth of the Renaissance in a Europe without boundaries.