From a Night Porter’s Point of View 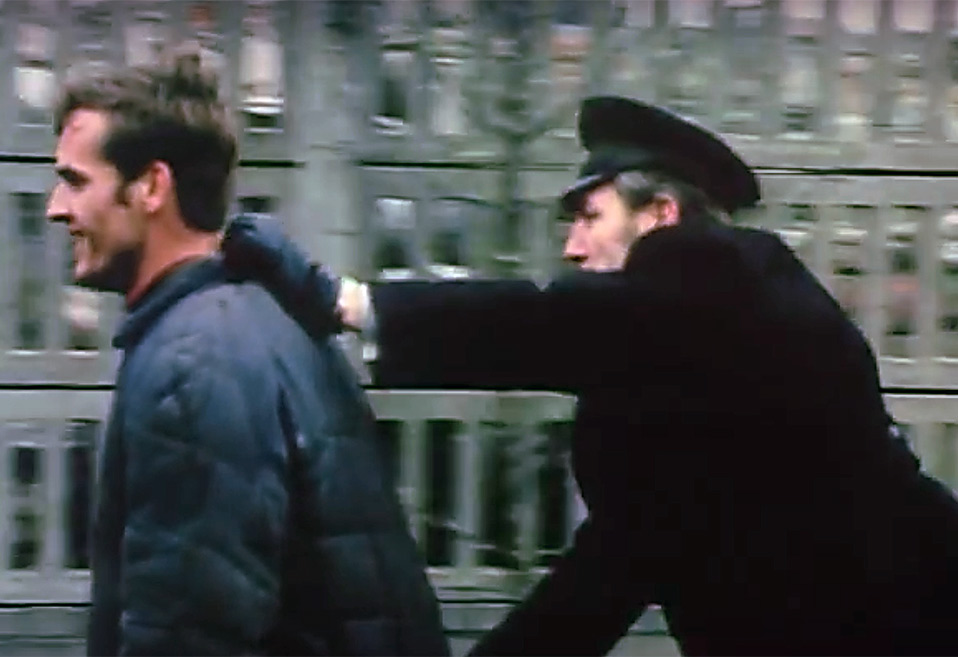 International Festival of Short Films, Krakow ‘79
Award of International Fedration of Film Press FIPRESCI for the “particularly ethical values and social tendencies of the film, as well as for interesting artistic solutions”

Story
Portrait of a factory porter, a fanatic of strict discipline, a man of almost fascist views, who extends his power even into his personal life as he tries to totally control everybody and everything in the belief that rules are more important than people… “That means that when a man doesn’t obey the rules,” he says, “you could say he’s a goner… Children also have to conform to the rules, and adults who live on this earth, for whom this beautiful world has been created. I reckon you’ve got to have capital punishment … Simply hang him [the culprit]. Publicly. Tens, hundreds of people would see it.”

“The porter saw this film and he liked it. Later my film won at the festival in Krakow, and later it was shown as a short at “Confrontations” [yearly show of ten best international productions, only held at select, ambitious theaters]. It in fact had a good audience, but of course a very special one – the audience that attends Confrontations. It has never been shown in any theatres in normal distribution. But in 1980 they absolutely wanted to show it on TV. (…)This porter wasn’t a bad man. He in fact really thought that it would be good to hang someone in public, because then people would be fearful and stop committing crimes. We know this point of view from history, and he was its representative. It is a result of his maybe not very high intellectual level, his rather simplistic approach to life, and from the environment in which he was brought up. I don’t think he is a bad man. I could hand him a subject: „What do you think of the death penalty?” or: „What is your approach towards animals? Do you like animals?” So he says: “Sir, animals I like. Once when we were eating, my son let out the parrot and it fell into my soup. But I like the critters.” And so on. I can ask about it, but I don’t write his dialogue for him. How in the world could I think it up? I knew whom I was looking for. I ordered from Dziob [“Prow” – Krzysztof Wierzbicki, a close collaborator of Kieslowski] a concrete person. Dziob looked for him for years. For many years I had been reading diaries published in Poland by Ludowa Spoldzielnia Wydawnicza [People’s Publishing Cooperative], which no one was then interested in. Incredibly interesting sociologically. It was called A Month from My Life, or The Most Important Day in My Life, or Diaries of Women, or Diaries of Workers, Twenty Years on the Farm, Diaries of Peasants. A lot of it was published, and in one of these books I found the diary of just such a porter: a man who, simply speaking, has anti-human – or let’s say, fascist – views, and I thought one should make a film about him. It happened to be a porter at a factory, too. I met him, but he turned out to be absolutely unfilmable. He had thousands of defects and impediments, so that making a film on him was impossible. But since I had already thought of it and written such a scenario, and the [Documentary Film] Studio had agreed to it, Dziob simply started to look for such a man. He went through more than 50 factories in Warsaw. He met 150 porters, he showed me 10, and we chose this one. (…) Tolo [Witold Stok, the cameraman] and I made a point of choosing Orwo film, so that the deformation of colors characteristic of this East German film stock starts to function as a sort of caricature of the world. The porter is a caricature of humanity, and we wanted the color to underscore even more the caricature-like world that surrounded him. I think it was Tolo who thought up the idea of using Orwo. Rather ingenious”.
(Krzysztof Kieslowski).