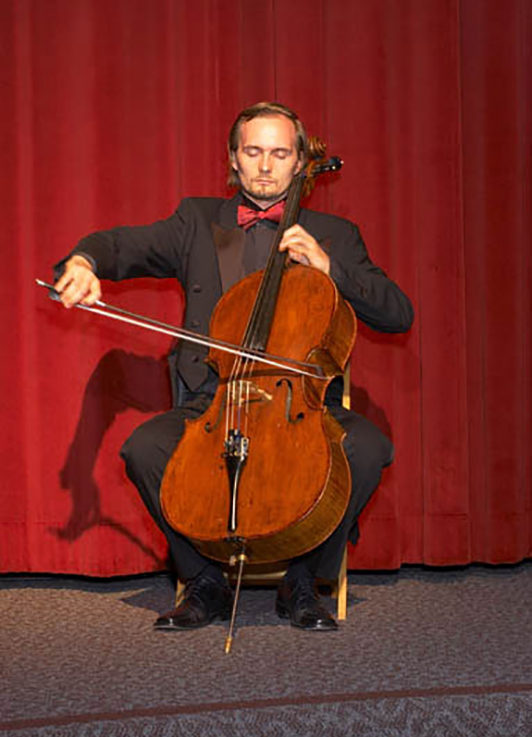 Cellist Jakub Omsky was chosen by the Santa Barbara Independent and recognized by the U.S. Congress as the Local Hero in 2001, and the Music Maker of the Year 2000. He is the winner of the 2000 International D’Angelo Competition in Strings. Mr. Omsky is recognized by critics and audiences as an emerging master cellist. His quest to become music continues with expansion of his understanding of folk and spiritual music of variety of traditions. His vast repertoire spans many centuries of Western classical music, and his own improvisational music is inspired by the great traditions of the East and West.

Mr. Omsky was born in Warsaw, Poland where he started as a prodigy of Prof. Arnold Rezler and the youngest student in the history of the Fryderyk Chopin Music Academy. He continued his studies with Peter Rejto and Andor Toth, Jr. at the Oberlin College Conservatory of Music in Ohio, graduating with Honors in 1995 (Bachelor of Music) and in 1997 (Artist Diploma). His mentor at the Thornton School of Music of the University of Southern California in Los Angeles is Prof. Eleanor Schoenfeld. Mr. Omsky has performed at prestigious summer festivals including Tanglewood Music Center, Aspen Music Festival and Music Academy of the West. He has performed extensively in Poland, Germany and the United States of America. He has recorded as a guest artist on RCA Victor Red Seal, Summit Records, PlayBall Productions, and other labels. His CD with a member of Los Angeles Philharmonic Michele Zukovsky called “Intermezzo” is available on Summit Records.

His composition “For Martin” dedicated to Dr. Martin Luther King, Jr. has received the Brilliant Retrievers of American Goals 2001 Award. For his compositions for “Danube”, a play by Maria Irene Fornes, he was awarded 2001 Theater Music Award by The Independent. Recently Mr. Omsky performed his theater music for “The Prisoner” — a Holocaust inspired drama by Henryk Grynberg, adapted by Omar Sangare for cellist and actress–with Deborah Latz, at the Mazer Theatre in New York City. Performances in Boston Santa Barbar, and Washington, D.C. are planned for fall 2002 and spring 2003.

He performs as a soloist with orchestras, composes music for theater and film and leads master classes and music workshops. His collaboration with Polish master actor and director Omar Sangare, initiated in 2001 is winning critical acclaim and they are going to make several presentations in the United States during 2002.